When the rain falls

‘Sunnnnnnnny days… everybody loves them, tell me can you stand the rain?’

Have you even tasted the rain before?

Would you taste the rain if it fell on you?

Would ya?
Could ya?
Should ya?

Deep in the depths of every woman lies a dormant little place where men and women seek but don’t always find.
A place where a smile is not always guaranteed and maybe the feeling of pee is making you, as a woman, slightly uncomfortable.
Today’s woman can find and get close to this place but may stop before she opens the door.

She stops because internally, it actually hurts.
Some may wonder what happens when you keep going past that point of pain and pee and make it rain.

The question of the matter is what will you do as a man or woman when you feel or are face-to-face with a pussy during its squirtation?

I mean, let’s say she’s on her back, legs bent next to your head, back arched, sucking air thru her teeth, holding the back of their head…
Her hips are rolling, her nipples are reaching for the sky and she’s told you that she wants to come.
And she does.

But she doesn’t just have an orgasm that coats the walls of her inner thighs and sits between the hairs on your chin.
Oh no no no…

This orgasm comes at you like a Mike Tyson hook punch (back when he was hungry).
God help you if your still eating when it rains.
You’ll cough, you’ll splutter, you may even choke just a little…

But if your not planning to be looking at the rain and, instead, it hits you while your dick is rubbing against her good spot, you still have to wonder…

And where does it come from?

If you are one of the lucky men in the world who get to witness a woman squirt from her pussy, there is ALWAYS some point where you think to yourself, what is it?

Is it really pussy juice that manages to squirt into the air like an old school water fountain?
Or is it just urine?
Are you getting peed on?

Joke is, the more he worries about it, the softer his dick will get.

When a woman is reaching that plateau of pleasure, she feels hot and bothered, pleased and pleasured and she feels like she’s about to do a number one in between the sheets…
Not so Flo Jo… it ain’t so…

Because if you go past that feeling, what you’ll find is a small or maybe even a large spray of liquid.

Just for the record, its not pee, contrary to what you may have heard, seen, believe or tasted (or maybe you got bumped and she peed on ya just a little).

But when it happens, what do you do?
Are you scared of it or do you go to and put your fingers and face right into it?

The sheets are soaked, its going thru to the matress and she is still spraying.

Cha, I say you throw yaself into that liquid face first and two finger ready.
It’s coming from the same place her normal orgasm comes from, just at a faster, more powerful rate (don’t quote me on that).
Don’t be scurred of it, its not pee…

It’s the result of a good days work… sheeeeet (Clay Davis voice) that means you have the right to take the nut to the face, to the eye, to the cheek or to any other place she aimed it.

God knows if you’ll ever get her back into such a situation, you may have got her to do it on a random ting… so while she’s there, keep the party going.

Some women can squirt, some can’t, some don’t even want to and others are DYING to do it but, for men, squirters are not to be feared.

They just project what they want…

How ready are you to receive it?

If a woman asked to squirt in your face, could ya take it?

If a woman asked you to make her squirt, do you think you could do it?

Did you even know that women could squirt? 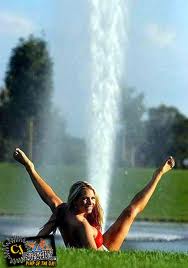