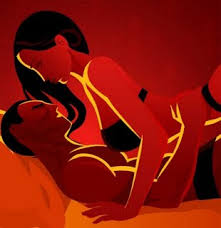 But you don’t always KNOW it’s you…

Allow me to explain…

The animal in you is the OTHER side of YOU that comes out when something, somewhere on your body is being treated JUST right.

You can’t explain it, you don’t think about it, shit, sometimes you don’t even remember it. But it happens.

How many times have you had an orgasm, or a SERIES of orgasms, then lay next to your partner and they’ve said something like, “since when do you call me a dirty fuck face fucker?”

That may have been your animal taking over.

How many times have you ripped a top off someone, ripped a pair of tights in hungry anticipation, bitten someone when all you planned to do was lick ’em, make the kind of sound you’d hear in the background of the Thriller graveyard scene.

The animal is usually a hungry beast that is unleashed when your right spot is treated the right way.

A soft lick flick on the side of her neck, just under her ear.

Two moist fingers on his nipple while your giving him head.

A big kiss on the inside of her thigh.

A kiss full of passion, desire, need, sex and all that good stuff.

Some folks live and breathe with their animals out on full blast at all times.

Never suck a dick without it.

But when those folk let their animals out, you best hold on to something because they will, in the purest sense of the term, FUCK YOU UP!

You may feel like you had a fight and lost.

But, we’ll get into that…

Animals, not like dogs, cats, lions, tigers, bears (oh my)

It’s more of a feeling. A rush of blood that travels through you and makes you feel like you need to impart some serious pleasure on someone or you just might explode. In the reverse, you may NEED that pleasure put on you in the same way.

There are usually a few ways to open the cage that unleashes the beast in another person, though that’s for you to KNOW your partner enough that you are an expert in bussing that lock.

Once awake, there should be a fat lady singing somewhere REAL soon.

Animals want to please or be pleased.

That is there only purpose.

And something you did woke them up.

And now you have to satiate them.

Or they’ll do it for you.

For men and women it’s different.

Guys, at times, allow their animals out early and may seem rather rushy rushy with the proceedings, trying to get to the good stuff before the GOOD stuff.

Forgiven, it’s something that you did woman that made him so eager and hungry.

Don’t get it twisted though, it’s not ALL of those men who are like that.

There are those who just have no game and think foreplay is a mixtape R.Kelly did way back when, therefore have no idea of it’s benefits or see the point in wasting time with it.

Women… ahhh… now they have animals that make them say and do anything.

You can hold a woman’s neck and lick it with a real slow up and down tongue flick, with her head to the sky, and watch her move away and look at you like, “Mama needs to feed!”

And feed she will.

This type of animal prefers the rougher treatment. It’s the oil for her engine, trust me.

Whatever she wants just GIVE IT to her. For the love of gawd GIVE IT HER.

You could NOT. *evil laugh here*

And that would piss her off.

Although you’ll almost, DEFINATELY, come away with a scratch, bruise, bite mark, black eye or a pinch internal bleed.

A quick stop, get up, over to the bed, bent over, directing you to get into position quickly.

On the other hand, a woman’s animal can be soft, gentle and in need of a light touch to give her what she needs.

Her intensity may not APPEAR the same as the rough stuff in the butt animal, but her desire, her wants and the cage are the same.

A soft animal may have the sudden urge to shower you with kisses.

You may have had her on her back, flat, looking good and all that, and you were working your hips the way you do.

And she was doing it back, the way she does.

You hit something that made her back arch or her forehead frown or a short sharp scream escape from her throat.

She looks at you.

And she reaches out for you.

Like she has to feel you close to her.

Whatever you did made her NEED to kiss you.

A sexual attempt to try and give away the same amount of pleasure that she is currently feeling. Or it’s a nice cherry on top of the cake she’s tasting.

The kiss isn’t like a quick join of the lips and then back to the loving.

She may wrap her arms around your neck because the kiss she needs means your not going anywhere.

She wants to taste you, to feel the same passion in your lips that she feels inside.

They have evil grins.

Their not scared to slap you.

They love that thing you do with you tongue and your finger.

They can taste your scent in the back of their throat.

Your presence alone wakes them up.

They make you forget moments in time.

They put you in shit you don’t even realise you do.

They’ll put you in a sexual figure four leg lock.

They know what they want.

And they want it NOW…

And that’s REALLY fun too…